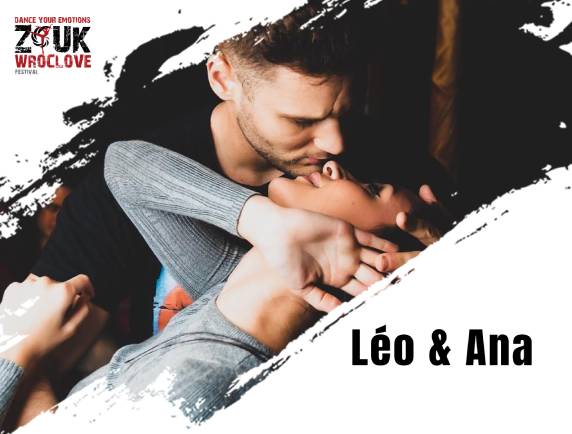 Leo & Ana begin their dance career through classical ballet and jazz as children, but their paths intersect only in the year 2015, when Ana was approved at an audition for a Leo team at his dance school. Leo and Ana are recognized for their technique, a quality of their shows that mix elements of Lambada, Zouk and other dances, and versatility in the social to dance various styles of music, this partnership has developed focused on studying of all existent styles of Lambada and Zouk, aiming to offer to the students a 360º panorama of what happens in the zouk community. For them the diversity of zouk and the dialogue between styles, is what makes the community so special. They test their studies in the main competitions of Lambada and Zouk in Brazil, consecrated 2 times champions of Lambada world championship in Porto Seguro, and in June of 2017 were the first placed of Brazil Latin Open, Brazilian championship of Zouk, judging by Renata Pecanha, Philip Miha, Gabriel Salgado, Leticia Beltrán, Karen Forcano and Ricardo Vega, competing with the best zouk couples in Brazil, selected and invited to compete by Rafael Barros and Carine Morais, organizers of this great competition. Since 2016 they have traveled around the world as instructors and international artists from Lambada and Zouk, and have taught in more than 40 cities around 20 countries in Europe, Oceania, Asia and South America.

Leo
26 years and 18 years of dedication to dance, began studying Classical Ballet and Jazz in the Alice Arja Dance School at the age of 8, with 12 years old he discovers the Brazillian Social dances, becoming a dance teacher and Samba specialist at the 16 years of age at the Jimmy de Oliveira Dance Academy, where he spent eight years experimenting with everything the school can offer, going through all styles of Brazilian dances, acting as assistant, then teacher, and also in school management.

Ana
Started in the universe of dance at 6 years of age studying for 6 years Ballet Classico and Jazz. At the age of 12, she took a break as an academic dancer and dedicated herself to music and theater. But in 2015 Leo found his passion for dance resurfaced, and his great talent and years of dedication prior to the dance boosted her as an instructor and performer alongside Leo.